How to build a design thinking movement in your business

Any change, anywhere, starts with people.

And design thinking is no different. If you want your business to adopt it, you need a core group of people who get it, love it, and help spread the word.

Jeanne Liedtka is a strong believer in the power of building movements to help make change happen with design. She also believes that those changes don’t have to be huge to make a real difference.

So, in our fourth blog in the Designers can change the world – Conversations with Jeanne Liedtka series, we share what Jeanne had to say about how to unite and empower people with design thinking.

Don’t mandate people to do it, find volunteers who want to do it

I’m a big believer that design thinking has to start with the people who are already confident and brave enough to know they want to try it.

And when they succeed and share that success, other people will want to do it too. That’s very much my mental model for how design thinking spreads, it is a viral thing, it’s hard to do top down.

Find people looking for a new way to solve problems

You have to lure people into design thinking in some way that’s meaningful to them. And for me the most effective way to do that is with somebody who has a problem that matters to them that they’ve been trying to solve – unsuccessfully – for some time.

Someone who’s thoroughly failed at solving some moderate level problem for a long time will usually be willing to give something new a try. They have nothing to lose by trying a new way because the old ways have failed.

One of my absolute favourite things about design thinking is that it is inherently subversive of authority. It’s something you can do without asking permission or even making a big deal out of it.

But a lot of people feel like they have to wait for permission to do something different.

For example, we work a lot with school teachers. They have a tendency to wait till the school superintendent says, “Here’s some new stuff, go do it.”

But you can say to them: Look, you can wait for the school superintendent and it would be awesome if they got behind you and gave you lots of support and tools, but you don’t need that. You can go into your classroom tomorrow morning, and you can change the learning experience of those 20 kids without anybody’s permission – and usually with resources you’ve already got.

People who value design will inspire others to do the same

What you need is that group of people that’s had a taste of what design thinking is, and who know that there’s a lot more they could do to deepen their practice.

A lot of our work is focused on people who recognise the value of design, and are frustrated that their practice is not producing the kind of breakthrough thinking that they know design is really capable of, and who are looking for ways to deepen it.

Now, that’s probably not 50% of the people out there doing design thinking, but hopefully it’s enough and they can model that behaviour in their organisations.

Scatter good designers across your network

I think that’s why you need this kind of viral approach to spreading it throughout an organisation, with multiple teams in multiple places doing multiple projects and working on their skills.

They’re not going to all produce top of the line design thinkers, but they are going to produce a core group of them, and they’re going to be able to coach and support others. 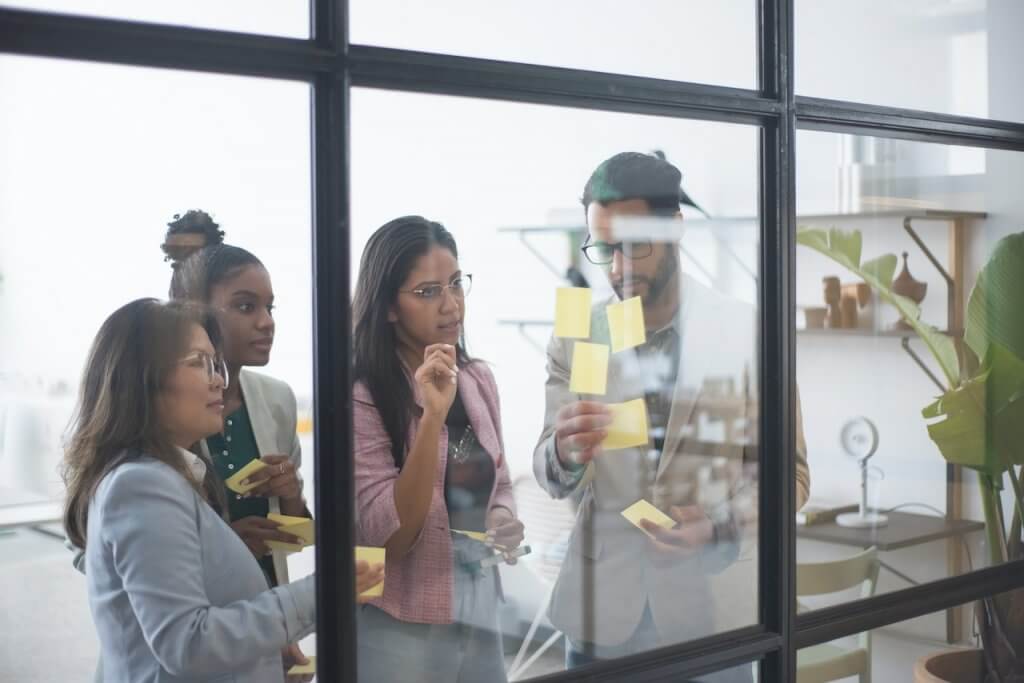 Change happens at a local level

Another great model for encouraging greater take-up of design thinking is things like ‘Train the trainer’.

So much of any change process in an organisation is local. You can’t drive it from the top down, you need to seed it, and then let it blossom within the locality. I think that’s why Train the Trainer programmes and coaching programmes, where people graduate into coaching after they’ve been through the core programmes, are great.

Those people become members of the organisation that are particularly good at design, and who are available to help other people do it. I think that’s a really important model for this kind of work.

Remember that small changes can make a huge impact

There’s such a sense of powerlessness in our world right now. There’s this feeling that there’s so much bad stuff going on and the planet is falling apart, and the notion that you have any power to really effect positive change can feel pretty remote.

But design thinking says: Look, you may not be able to save the planet writ large, but you can go change people’s lives tomorrow in ways that, if everybody did it cumulatively, could be huge.

That’s the energising factor that enables people who are trying to make things better to sustain their energy and optimism in the face of what can often feel very negative.

It feels good to try

I think that’s true as a citizen of the world, and it’s true as a citizen of most large organisations that I work with, whether they’re universities or corporate bureaucracies or governments. It is often very hard for 90% of the people in those organisations to feel like they can meaningfully change things that matter to the welfare of other people. And I think design brings the message that you actually can, you just need to look at the world differently. And it feels good to try.

In this series, we look at the four biggest obstacles to making design thinking pay off, and show you how to overcome them.

Why empathy is the key to winning over design thinking cynics

It’s pretty much inevitable when you try something new at work that you’ll come up against some cynicism. We see it all the time. However enthusiastic individuals are about the difference they believe design can View »

How to be a great internal innovation champion

Innovation champions can come from any part of the business – whether they already have innovation-focused roles, or they’re somebody in marketing, HR, or operations with a passion for making change happen.